On May 18th and 19th, the Sitecore User Group Conference was being held in Amsterdam. A conference organized by the Dutch and Nordic user groups. More than 450 Sitecore professionals from over the whole world attended this conference.

In the keynote by Lars Nielsen he mentioned that he challenged the Technical Marketing team to build a demo of what you can do with Sitecore today. So that got us thinking, we wanted to do some cool stuff but where limited on time as we needed to build something next to our day-to-day activities.

We started to think of innovative ways of displaying Sitecore content. That is when we came up with VR and particularly the Microsoft HoloLens. We came up with the idea of creating a website that contains all of the Sitecore User Groups worldwide and keeps track of their activities. Using the HoloLens, you could see a globe that contains the locations of all those user groups. In addition, by selecting a user group, you would get more details and a list of their activities.

The idea was born and now back to drawing board. We needed to create a website and expose data used in that website to a third party application. Next to that, we were also limited on time.

Combining all those factors, we concluded that we needed to use the Sitecore Experience Accelerator to build the whole application. This immensely powerful tool gave us to power to create the whole website in a few days. We used the wireframe theme to create the first draft of the website. At the same time, we started to collect the user group information and putting that into the application. We started out with SXA 1.2 but already knew that the upcoming version 1.3 provided the option to expose data by JSON. Since SXA has the power to automatically update your information architecture the upgrade would be fairly easy.

Obviously, we needed a place to host the Sitecore instance. And that’s where the Sitecore Managed Cloud comes in. Instead of asking our IT department to setup a server, we reached out to our cloud team. They were more than happy to help us out. In fact, we were there first “customer”. We followed the whole process exactly as our own customers would do. This way the cloud team could test the whole process and we got our servers.

Within two weeks after Lars challenged us to build something cool we had combined Sitecore, SXA and a Microsoft HoloLens all hosted on Azure. However, we still had a week left before SUGCON. Rather than leaving it there, we started to think what else we could do.

One of the trends in the consumer technology we noticed is that of smart home assistants like Google Home and Amazon Alexa. After some research we found that we could use C# to write a so called Alexa skill and host it on Microsoft Azure. We used an open-source library which gave us the scaffolding for a Alexa skill.

We defined our intents (name) and utterances (sentence) in the Amazon Developer portal.

To control the response Alexa would give back to the user we defined this in Sitecore. For all the intents we created responses based on regular items. Those responses included variables like event name, location and description. The value for these variables we got from a JSON list of all events. We would replace the variables with results from the in the Alexa skill project.

Then once Alexa got a question from the user, the skill would get the response from Sitecore and replace the variables. This way we were able to adjust the Alexa response simply by changing the content within Sitecore. Additionally, it also gave us the power to personalize responses since the JSON generated by SXA can be fully personalized.

There you have it, from nothing to a reponsive website with HoloLens and Alexa integration in three weeks! 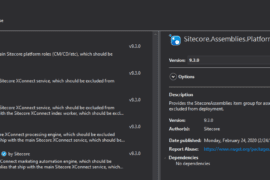 Filter Engagement Analytics reports by site with a custom filter